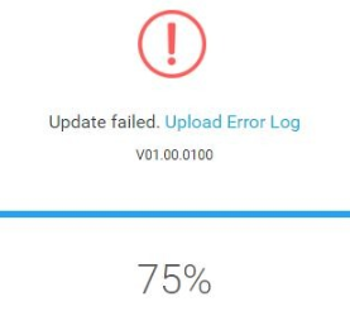 On April the 18th 2019, NoLimitDronez became the first application in the world to support modifying of DJI’s latest prosumer drone line, the Mavic Pro 2. Since then we have been dealing with users who have tried a firmware flash and have experienced significant problems in doing so.

Initially, we were concerned we had missed something & that NLD was to blame. Upon commencing our investigation on this (which included the failure of one of our own Mavic Pro 2’s), we have identified the issue and we have been able to reproduce it repeatedly.

When doing a firmware flash, it will seem to get stuck and then fail at 75%, the drone will be unable to pair with its remote controller and you will also see abnormal behaviour on the sync LED. When we reviewed the internal upgrade logs from the drone, it became immediately clear that module 0901 and/or 0907 is not responding.

Further research into the subject revealed that there is a DJI thread about this problem, so the issue is known to DJI: https://forum.dji.com/thread-169241-1-1.html

The people posting in the DJI forum thread are not customers of NLD and as such have still run into the same firmware flashing bug when simply using an un-modified Mavic Pro 2 and performing a firmware flash with DJI’s own app.

It seems that for now, the only course of action is leaving the drone to sit and allow it to attempt its auto recovery. If auto recover fails, then we advise to contact the DJI support department using this link https://repair.dji.com/repair/index. You should fill out the form selecting “Firmware Update Failure” as the issue. You may also have luck returning the drone to your local retailer if you purchased it "off of the shelf".

NLD fully understands that during the release of new products and software, things can get missed, it is very unfortunate that DJI let this bug slip through their quality control.

As for where NLD stands on this? If you’re getting this error either with our application, or DJI Assistant 2, please understand that NLD did not cause this issue. The loop is caused by poor firmware flashing code which doesn’t have adequate protection in place for recovery or rollback if a critical module such as 0901 fails the flash process.

We appreciate it’s frustrating to experience issues such as this and not know whether you’re alone or not in having this issue, hence the reason for this blog post.

4/27/2019 4:02 AM
The Dji forum post from the link was October 2018. Why did NLD roll out support for the Mavic 2 knowing this? Surely this bug would have appeared during test between 10/2018. I can’t speak for the rest of those having this problem but I didn’t experience this issue until I tried to flash my Mavic 2 with the NLD client. I never upgraded beyond V01.00.0200 and used Litchi instead of DJI Go mainly to prevent being asked to upgrade the NFZ database or firmware every time I executed Dji Go. This worked well for me. I took interest in NLD with hopes that I could go back to the Dji Go app without NFZ restrictions. My aircraft main core module was locked down only after I tried to flash my Mavic 2 using the NLD client. I wish all the best for those who send their Mavic 2 back for warranty service. I’m not wasting my time with this and just purchased a core module. I am back in business with a $295 lesson learned from using third party software. It’s become obvious that Dji is working very hard to keep users from modifying their products. If NLD sorts this out in the future maybe I could bring my old main core module back to life.
Aaron

4/28/2019 10:53 PM
My drone got bricked because of patching with NFZ patch and you saying is not your fault !? What should I say to DJI then why its happened , used NLD that bricked my drone or should I lie ?
Guest

4/28/2019 11:28 PM
Without the possibility to eliminate the Altitude Limit, all this effort, for me, is almost totally useless!
Ronn

4/29/2019 7:53 AM
OK, so how are we supposed to identify that we are at risk. Do  we go ahead and just try?  Is this  issue appearing at a downgrade or an upgrade?  does it only happen at  a certain version of the firmware? I starting to think that release of NLD was premature for the Mavic 2 Pro. Please provide a little more guidance, especially for the fact that you don't provide refunds.
CS2000

1. Were we aware of this bug? - NLD was not aware of this firmware bug before we dropped the release of 1.9 and hadnt showed up in our testing period in which we flashed our selection of M2's an uncountable number of times.

2. You bricked my drone! - If you think we're at fault, then you need to re-read the article.
WE DO NOT FLASH YOUR DRONE!
All we do is make the firmware available, DJI's programming actually flashes your drone. Just tell DJi you did a firmware update and this happened, like it covered in the blog post.

3. Altitude limits - The birdmap has never said we could remove altitude on the m2, we hop[e to have this added, and will release if/when we have the ability to do so.

4. Does this even work? - Yes. but we cannot account for the hiccups that DJI's code contains.

5. How do i know if im at risk? - You really dont. We flashed our MP2's an unimaginable amount of times testing NLD 1.9, all went OK. But when we were looking at this issue, one of them got bricked and had to be repaired. As it stands, if you do any firmware update/downgrade using Asst 2 or NLD, you're at risk of this bug just randomly happening, as its a bug in the DJI firmware or the code on the drone, its not one we can fix. Hopefully a future FW update from DJI fixes the flakiness.

5/1/2019 7:10 PM
for me the NLD client flashed the firmware without any problems at all , i down graded from 300 to 100 with no issues the way the instructions said, then patched the NFZ , had the white led flash once so i think everything went fine, still get a geo message that im in a warning zone but thats all, havent tested it in a compleatly no fly zone as of yet.
Chris

5/11/2019 4:43 AM
If you are already on 01.00.0100, you do not need to flash the firmware again, just apply the Remove NFZ patch.  Watch the progress and upon startup you will see the white leds flash...thats how you know the patch has been applied successfully.  If you upgrade off of 01.00.0100, you will override the patch.  Always start your drone in this order:  RC  --  Drone, get connection, then connect device with GO.
Rob

The NFZ did not work, but that's not a big thing for me
Jason

4/16/2020 9:46 PM
Is there an updated solution to this? I ran into this issue as well. And unfortunately, my drone is out of warranty.
Blog search
Blog archive