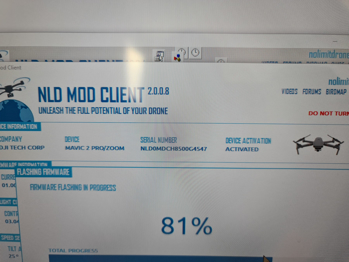 We apologize for the delay of the NLD MOD Client update, but due to DJI changing stuff in the newest
firmwares, we have had to re-patch the system files to prevent bricking the core board.

To prevent further delays we have chosen to split up the update so tomorrow we will release a NFZ-capable
NLD MOD Client update. The update will enable your core baord, but you have to downgrade to .0100 to use the NFZ-patch.

The 2nd client-update will implement Altitude removal and NFZ and place them directly in the system files,
instead of using mods/patches.

And when will the version be available?
Robert